The Gouda Shop could not offer the wide and wonderful range of products we do, without a host of fabulously talented local people. That’s why we decided to put these people in the spotlight.

Thijs C. Jansen is a freelance illustrator and creative artist from Gouda. He is married to Famke and father of four sons. 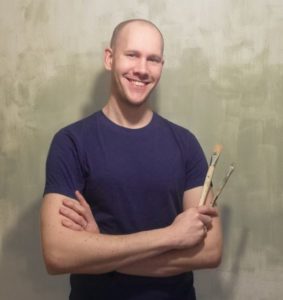 It’s Thijs’ passion to make you happy with his creations. From illustrations to portraits to murals, everything is handmade with love, to make you smile!

He has been drawing and painting since childhood. During high school he did many creative courses. The preparatory year of the Willem de Kooning Art Academy in Rotterdam was one of them. One year later he was admitted to the Constantijn Huijgens Art Academy in Kampen.

The illustrations that Thijs creates for newspapers and other media have many details. He uses traditional materials like pen and ink, watercolour and acrylic paint. The characters are easily recognizable by their funny bulb eyes.

While renovating their house, friends found several old Dutch newspapers and asked Thijs if he could use them for artistic purposes. That’s how he got the idea of using the more than seventy year old newspapers as backgrounds for illustrations.

These original, handmade drawings of monuments in Gouda are exclusively for sale at The Gouda Shop! 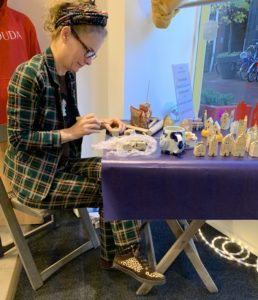 Dieuwertje Verhagen likes to portray the real world a little differently. She plays with reality and distorts it. As such she endeavors to enhance an image’s individuality and make it fairy-tale-like and imaginative. She makes funhouse mirror versions of Gouda buildings. The result is absolutely unique and very recognizable “Dieuwertje”.

Dieuwertje completed the creative therapy course in visual arts at the Utrecht University of Applied Sciences Utrecht. Then she started with murals and paintings. Following that period, she started making sculptures of ceramics in all shapes and sizes.

Dieuwertje very much enjoys taking her work to markets throughout the country. She says: “I like to give people something that makes them happy.”

Our shop has inspired Dieuwertje to make an extensive range of Stroopwafel-related work. She started out with one Stroopwafel Animal, but it has fast turned into a whole plethora of different items. We love them and so do our customers!

We are also very happy and proud to have Dieuwertje’s recognizable work in The Gouda Shop!

Trudy Otterspeer trained as a pottery-painter at the Gouda Plateelbakkerij Zenith in the seventies. In 1987 she started her own studio: Ceramics Atelier Fortuna. In addition to fine decorative pottery in Delft blue and other colors, she was commissioned to paint marriage and birth plates. No longer bound by an employer to stick to certain patterns, she developed  her own designs. 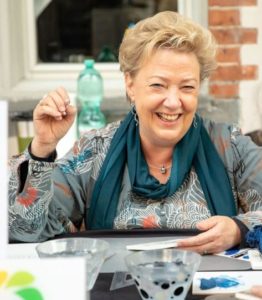 As of 2007, Trudy has been working under the name Ambachtelijk Plateel (artisan pottery). Besides commissioned painting, education is an integral part of her work: workshops, courses, demonstrations and presentations. In addition, she is a teacher of decorative painting techniques at the SBB in Gouda, the vocational training for ceramics. Trudy also gives workshops in Greece.

At the end of 2014, ‘Pottery painting in Gouda’ was placed on the National Inventory of Intangible Cultural Heritage. As proposed by Trudy Otterspeer. Part of this recognition is the obligation to increase the visibility of the craft and to keep the tradition alive. Documentation, research and the transfer of knowledge form the core of the accompanying heritage care plan, the implementation of which is now in Trudy’s hands.

Jan Mostert was trained in construction and maintenance carpentry and furniture making and did an internship in timber and shipbuilding. In addition, Jan was schooled at the Academy for the Arts to become a Fine Arts teacher.

After a period as furniture maker and carpenter, he decided to focus on making sculptures. From the early 90s Jan exhibited at very diverse locations, ranging from galleries and museums to companies, trade fairs and artists’ associations. This led to an extensive oeuvre of autonomous work and commissioned images.

In recent years he became increasingly involved in cultural & artistic lessons at schools and local projects where, in addition to supervising and guiding the children, he also makes sculptures on the spot. Jan: ” by creating a work of art in the presence and sometimes together with children, a greater involvement is created so that objects, when placed, become a part of themselves and the environment. There is, as it were, a copyright that transcends the personal and the relative vulnerability of the material becomes the ‘greatest strength’. ‘

When The Gouda Shop came to Jan with the idea of ​​making a music box with the town hall’s carillon, he immediately became enthused. In addition to the unique music box, Jan has now made a series of special small artworks for us. And of course we are proud that we also have bigger work from Jan in the shop!

Maaike Hoonhout is a graphic designer from Gouda, a pictures collector and an artist. A creative Jack of all trades.

Gouda is her place of creation because this is where she lives, works, walks and is amazed on a daily basis by details in everyday moments. She prefers to look through the eye of the camera, so that she can immediately capture these moments. She has built up a large collection of pictures, mostly of Gouda. The desire to create order in her collection resulted in the color collages. The Gouda Welcome-Wall, a canvas measuring 84 meters wide and 4 meters tall, along the railway at Gouda’s train station, is a well-known example.

Other everyday moments as well, such as sharpening the colored pencils or having breakfast, can suddenly be the inspiration for a (photo) work of art. An example of this are the Wastefaces, faces made from waste material.

Maaike regards social media as an exhibition space, where she shares her photos and artworks first with friends and followers. Her work also finds its way to the analogue exhibition spaces and the walls of enthusiasts. Maaike can sometimes be somewhat modest about her work, but The Gouda Shop cannot wait to have more of her work in the shop. We enjoy the way in which Maaike portrays our beautiful town and we are proud to offer her non-Gouda creations, such as the Wastefaces, to a wide audience.

MKHNHT (Maaike Hoonhout without the vowels) is the name of the label under which she exhibits and sells her work.

Local talent Peter van der Kroef has a background in pottery and the different decorative possibilities of ceramics. Peter was educated in Gouda (ceramics) and Rotterdam (Visual Arts) and at a young age he started working in the Gouda pottery industry. 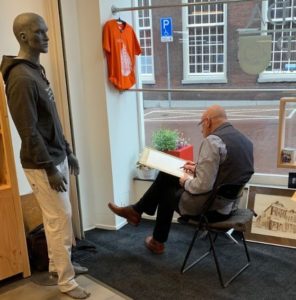 After more than 30 years working for several pottery factories, Peter started out on his own in 1994. As a free artist he was no longer bound to the assignments and styles of an employer and he could give his talent free rein.

Since then Peter has started to focus more and more on watercolors and pen drawings of, in particular, town views. He gets his inspiration both from afar and up close. With a small caravan behind his car he travels through Europe and is inspired by the beautiful landscapes of Scandinavia and the beautiful country houses of France. New Zealand has also become an inspirational destination in recent years. After his travels, Peter comes back to commit to paper, the well-known Gouda streets.

It’s obvious that painting is what Peter lives for. This town-artist has exhibited at busy locations such as the Euromast in Rotterdam. But also locally in the Agnietenkapel and Peter had a large retrospective exhibition in Gouda’s St. John’s church.

Remco-Daniel Gielen has been a professional photographer since 2017. He studied at the Fotovakschool in Rotterdam and specializes in city and night photography.

Remco photographs at events and makes photo reports commissioned by companies, government, foundations and organizations. He also sells selected free work on request. For example, every new resident of Gouda receives a welcome package including cards with his photos.

Besides photography, Remco also gives workshops in photography. In two years he has already taught more than 600 photography enthusiasts about technology and composition in the field of evening and city photography. He teaches in Rotterdam, The Hague, Amsterdam and of course in his own town, Gouda.

Remco’s work stands out for its thoughtful compositions and Remco’s eye for color and light. He is not only interested in a beautiful or interesting place or building, he also aims for the most perfect conditions. So for this reason, Remco sometimes needs to go back several times to a location so that he can take the photo he has in mind.

The Gouda Shop is pleased to have Remco’s beautiful views of Gouda and its surroundings in our shop. And if you look around the shop carefully, you might find other products for which Remco’s photos have been used!

Bart van Haperen is a local furniture maker who realized that too much wood was being thrown away in his environment. Wood is a material which, in itself has a very long lifespan. Bart wants to show that wood can easily be given a second life. He also wants to prevent unnecessary logging.

Bart has now found a new purpose for local ‘waste’ wood in the form of The Gouda Cheese Board.

The Gouda Cheese Board is made, 100%, from waste / residual wood from Gouda. The board is made in a traditional way and largely made by hand.

It was early 2005, when Coen de Koning, caught by the splendor of colored glass, decided that the time had come to start up a stained-glass studio. ‘t Ruitje (tiny window) was started in a shed behind his house in the Kade neighbourhood in Gouda. However, the shed quickly became too small and the studio moved to the center of Gouda in 2007.

In 2012, Coen decided to move again. This time to a location just outside the town center. In view of the size and diversity of the projects and the professional new studio, he changed the name to De Goudse Glazenier (Gouda’s Glazier).

Coen is now one of the few certified glaziers in the Netherlands, with certificates for fusing/slumping and sand blasting in addition to the glazing diploma.

In addition to the courses and workshops he gave in his own studio, Coen has also taught the students of the glazier training at the vocational school in Schoonhoven. This training has since moved to Sint Lucas in Boxtel.